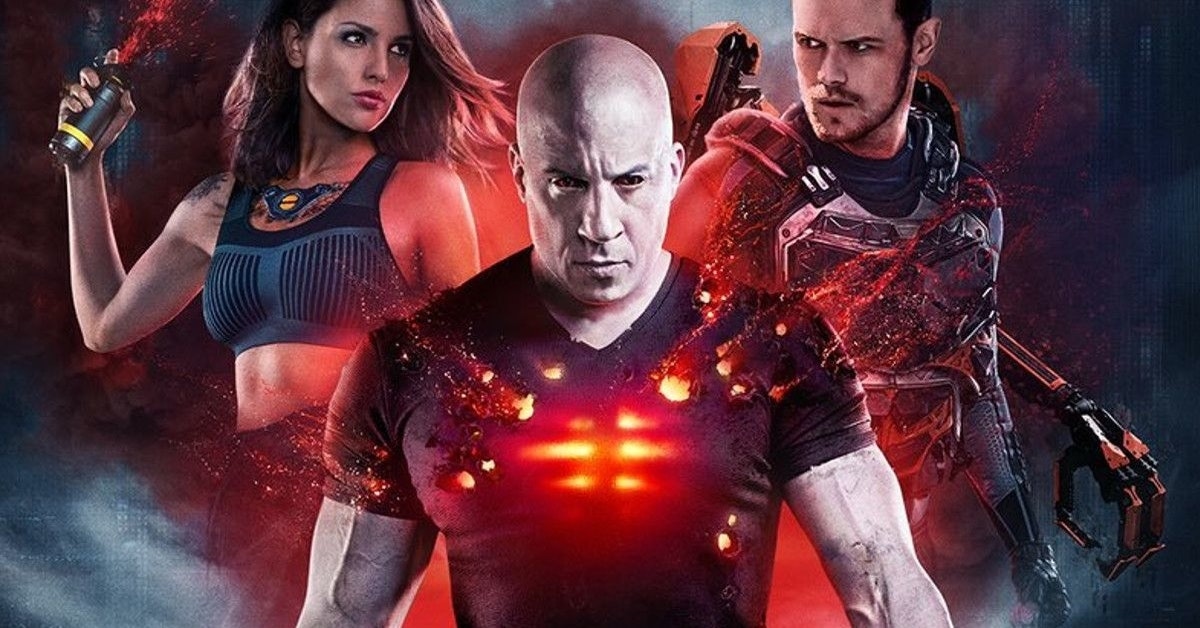 We had so much fun recording last week's extra episode, we went and did it again.

We watched, well some of us anyway, Bloodshot. The results were surprising!

Did anyone like it? Who could not enjoy the acting prowess of Vin Diesel? Couple that with some incredible state of the art CGI and you've got yourself a winning formula.

Tune in and let us know of any midweek masterpiece contenders.

Until then, we remain

Sidey:  this is another mid-week masterpiece that we've got this is not a forgotten gem though This is a recent jam we got

Reegs: we have 2000 and twenties bloodshot Based on a Valiant comics character I'd never heard of VIN diesel pays bloated meat puppet Ray Garrison a special forces soldier who in the opening scenes of the movie foils  a terrorist situation Easy for you to see in Afghanistan

Reegs: then he the this is the kind of movie where after he foils the terrorist situation there's a sort of smash cut to him getting off a plane directly from a hostage crisis He rips off his combat fatigues to let his muscles breathe and immediately hops into a Corvette with his wife and drives off to Italy stunning Amalfi coast

Howie: Well when you started this off by saying it's not so much a gem that you've kind of made shine It's more someone's polished A turd is fucking a Bismal This isn't it It's a bit of a spoiler from the start And I'm gutted because apparently this is quite a good comic comic character That's got had lots of plans to develop into

Sidey: Yeah It's Valiant And I went on their website to see if I if I knew any of their other stuff and there's fucking loads of of bloodshot stuff they've done And the only other ones I'm aware of is definitive which I've read all the books of

Dan: If anybody's listening completely lost like I am then that's fine What the fuck is bloodshot Can we take it from the top again So what is it

Howie: you find out if I

Reegs: haven't got to it yet

Sidey: This is origin story

Reegs: is his origin story So

Dan: Is it we cut film or cartoon or we got a

Howie: It's a film from McCarty

Howie: So masses of script loads of loads of real deep plot characters

Dan: where I am

Howie: Your character characters built up And then there's a fast car does a wheelie and that's it Right

Reegs: sadly the kind of wedded bliss that we're treated to in the opening minutes cannot last and Ray and his wife were murdered by Toby Kebbell

Howie: sorry before you go on this is a PG And I was thinking Oh what Let the kids watch this Well I fucking mistake That's milestone Okay They step out to have sex Oh fuck You know it was not good co

Reegs: that was before the killing So they were going to have and Toby Kebbell plays a complete psychopath dancing to talking heads No 'cause he's psycho killer which is

Reegs: anyway he re is killed whereupon The shady organization run by guy Pierce helps kickstart a murderous revenge rampage by bringing him back from the dead using nanobots which gives him incredible superpowers The capabilities of which are not really

Reegs: Yeah so he then goes off to avenge the death of his wife this mission then completed Ray begins to learn that his memories might not be completely reliable and that the shadowy clandestine organization that rebuilt him complete with a team of ex soldiers who all have augmented cybernetic limbs Following various incidents One of them I think says he killed bin Ladin The guy with the robot legs no Yes he's in the cabal

Reegs: he they he finds that guy Pierce may have ulterior motives which well basically he is using implanted memories into bloodshot in diesel too Kill off the competition effectively So he we go through this scenario of him murder of him capturing The killer of his wife his memories are kind of wiped They remap some new bullshit I'm giving away a massive twist in the movie which you see coming a mile off they wipe his memories and kind of programing them again with on with the next victim So he's kind of like a soulless killing machine obvious Robocops slash universal soldier

Howie: now you also use the same mapping technology out of the running man you know where they changed the face change it back again

Reegs: so yeah I mean the movie continues with predictable enough fights against the other robotic members

Sidey: Does he get

Sidey: Does he get his original memories back then

Reegs: He does so he ends up having an EMP detonated near him And then a guy who wrote the original code for the bloodshot software staff algorithm They probably say he is able to kind of rewrite his

Reegs: one you mentioned earlier with the terrible

Dan: Does it does it end that he doesn't know if he's really here more if it's actually a

Reegs: No he just has his memory clear The software that they use is specifically mentioned to be open source which

Sidey: should be downloaded later

Reegs: in me is kind of lolling really hard at the fact that this AI nano bot technology is like been written by some specky student on a Linux or something And it's like So the movie is predictable and often unintentionally hilarious There's a bit where he looks at his wife in slow motion and says with cringe inducing sincerity see that that's where we're fighting for which made me Lowell it's also a bit of a narrative mess with a really strange structure Partly down to that twist that we talked about it looks like it was edited by Michael J.

Howie: I I found the other agents aesthetically pleasing as well

Dan: I do know what you're I like guy Pierce really really cool Like he did this astray alien show where he played a detective

Dan: here He plays a detective Have you seen it Jack something

Sidey: I dunno I just expected this to be a joke

Reegs: yeah me too

Dan: fash put me on to it It's a it's a really good one I can't remember It's something Jack Guy Pierce You'd find it if you're you're interested that was really cool And I do know what you mean about some films not Really ever being that great but you enjoyed him anyway Kind of like Elvis and Nixon the other day for me where I just it's a six and a half film but for some people it's an eight

Sidey: yeah sometimes sometimes I just hit any you out

Dan: get that humor You can't help but like it so I know where you're coming at If you've just enjoyed this despite it Knowing despite it being not very good And you knowing all the twists because you just comfortable and you want to go go with it

Howie: What's the what's the new one the rocks Adam something seems really lazy name

Sidey: DC universe but there are obviously some flops So what other What would you put this on a par with and from comic book movies I've not seen that but

Dan: well that's that's kind of one of those that's wiped down the bottom You've got dr Strange Yeah Which you know again

Dan: I mean if

Sidey: I'm not seeing it I seen the the Jessica grabber ones

Howie: This is the new one That's got the same Chaput So is it in the same

Sidey: be bothered to watch that knowing that it's going to be a stinker

Reegs: yeah It's I would like to see it It's weird that and you mentioned it this is a PG 13 movie but it's very very violent I'd love to have seen what Paul Verhoeven would have done with it And it was right up his alley the whole you know he loved this

Dan: Do you think that they they argue about the ratings and to try and get it down some more people are then able to watch it

Reegs: Maybe I would think

Sidey: I think so because this didn't this was right at the start of COVID

Reegs: it it did have a cinematic release I don't know if it did in the UK but it did in the us but it was only 45 million to make And that's probably because the CGI is so bad And like I said the editing is is terrible

Sidey: You got any any figures for what it may cause I don't know if this would've made its money back

Reegs: No I don't know You're the figures man Really

Sidey: Yeah I didn't do that first one

Howie: Cause it's just

Reegs: I don't know that anybody could I think his name is John bloodshot

Sidey: close I read that he closed because of the nanobots his chest glows red when

Reegs: they can he can rebuild himself basically like it So I think in one of the scenes in the movie purposefully blows himself up

Howie: When he gets his head shot half off as well And it rebuilds

Sidey: it sounds like Deadpool in the sense that you know he was dying dead

Reegs: But this is stone faced serious though

Howie: He reminded me of big hero six

Reegs: is that the animated one

Howie: with the nanobots that go that's why I was watching I thought Oh maybe no

Reegs: That's a really good movie better than this but

Sidey: then diesel is basically got a level and although the fast and the furious films I really like He has himself been surpassed in his own franchise by the rock and Jason Statham Yes And so he he seems to me to have this sort of ceiling where he can never go beyond this sort of I'd say he was like B list

Reegs: he's B plus

Reegs: but he's not a minus

Howie: I've had a memory fade There is one of his films I really quite enjoy It's one of his early ones It's the

Howie: So maybe that's where he could

Dan: he's he's one of a few isn't he that fill that niche of

Howie: He's a new Jean-Claude van Damme That's what it is It's not going to go any higher

Dan: You've got the rock Who's probably the the higher class model of this I mean just because of his film choice Jumanji I thought was brilliant and he's done a few others that are that are fantastic But yeah VIN VIN diesel you know what you're getting And this is what you get and you enjoyed it

Sidey: 10 what would you give it

Reegs: Go for it. Go

Dan: Anywhere between three and eight, this will be likely to be scored. Is it?

Reegs: well, like I say, I can't really recommend that anybody watches it, but I did get a kick out of